Our relationship with the United States of America

On this strong foundation we have built strategic knowledge-based partnerships with states, provinces and world-leading institutions such as the Smithsonian. Partnerships range from science and innovation to entrepreneurship, research translation and commercialisation.

Our collaborations continue to grow and develop thanks to forums such as the BIO International Convention (BIO). Held annually in the USA, BIO is the largest global trade and investment event for the biotechnology industry.

Queensland has sent a high level delegation to BIO every year since 1999. New connections made pre, post and at BIO have led to significant collaborations. These include a recent partnership between the Queensland Government and Johnson & Johnson, focused on health innovations.

Our outstanding research and development capability is acknowledged and endorsed not only by world-leading institutions, but by at least 1 world leader. 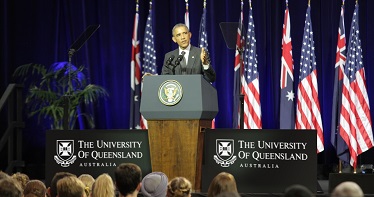 Former US President Barack Obama speaking at the University of Queensland.

The 44th President of the United States, Barack Obama made a historic visit to Brisbane in November 2014 to attend the G20 Leaders’ Summit. During his visit former President Obama gave a widely publicised speech at the University of Queensland (UQ) about science and innovation.

The following is an excerpt from President Obama’s address:

This university is recognised as one of the world’s great institutions of science and teaching. Your research led to the vaccine that protects women and girls around the world from cervical cancer. Your innovations have transformed how we treat disease and how we unlock new discoveries. Your studies have warned the world about the urgent threat of climate change. In fact, last year I even tweeted one of your one of your studies to my 31 million followers on Twitter.
(Source: The White House website).