Science for defence, aviation and space

Queensland is an Asia-Pacific defence, aviation and space research and industry hub, with a reputation for excellence in:

Queensland is a leader in unmanned aircraft systems, with the world-class Trusted Autonomous Systems Defence Cooperative Research Centre based in Brisbane. Queensland also has strong capabilities in the future of helicopter design and the integration of electronic systems into aerospace applications.

Queensland has several leading institutes and centres and over 40 research organisations involved in defence, aviation and space research.

Contact the commercial partnership offices of Queensland universities and research institutes for details of their research-industry collaboration or investment opportunities. Example of how Queensland science has driven industry development Designed by DES with consent of all parties shown.

Support for defence, aviation and space in Queensland

The Queensland Defence Science Alliance (QDSA) is a university-led partnership that facilitates and strengthens connections and collaborations between Queensland universities, government and the wider Defence industry to rapidly translate ideas into reality. 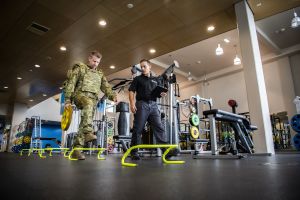 Through their extensive network of researchers, the Griffith University Defence Network co-creates solutions for defence needs, and gives the Department of Defence and Defence Industry unprecedented access to world-class expertise, capability and know-how spanning areas as diverse as advanced technologies and social marketing.

Queensland's aviation and aerospace industry comprises more than 300 enterprises that range in size from global corporations to small and medium-sized businesses. These enterprises represent 31% of Australia's total number of aviation and aerospace firms, making Queensland a major hub for the industry in the Asia-Pacific region. Queensland is home to Australia’s launch vehicle and aviation manufacturing sectors and Brisbane is home to Boeing’s largest aircraft spare parts and chemical distribution centre in the Asia Pacific region as well as Virgin Australia’s head office located in South Brisbane.

Australia has a strong and dynamic space sector that is supported by the Australian Space Agency and the Advancing Space - Australian Civil Space Strategy 2019 – 2028 that provides a long‑term framework for the space industry. Australia’s most advanced launch vehicle developers – Gilmour Space Technologies, Black Sky Aerospace and Hypersonix – are based in Queensland and are supported by Queensland’s Space Strategy which builds on the Queensland Aerospace 10-year Roadmap and Action Plan. The key priorities of these plans are to strengthen Queensland’s existing capabilities to support research into space-related topics and enhance human capability by promoting clear career pathways into the space industry. The Bowen Orbital Spaceport (being constructed during 2022) will be Australia’s first launch site for affordable and reliable low earth orbit small satellites. 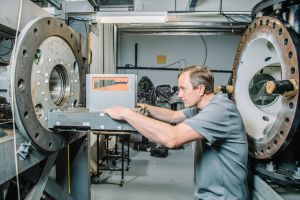 UQ and UniSQ excel in launch systems research, testing and advanced composites. Research at the Centre for Advanced Materials Processing and Manufacturing is developing new combinations of metals, polymers, ceramics and composites and the Centre for Hypersonics is a world-leader in hypersonic technology and reusable rocket research with a hypersonic wind tunnel.

Queensland supports a network of regional Innovation Centres and vibrant QiHub innovation community. The university-industry relationships with these hubs and centres are shown in the Strategic Visualisation Tool.

The Advance Queensland Industry Research Fellowship awarded by the Queensland government supports researchers partnering with industry including defence to complete original research that will have a positive impact for Queensland.

UniSQ is Australia's only university with both the Boeing 737 and A320 flight simulators accessible to students. Additionally, UniSQ, Griffith University and CQUniversity have partnered with Qantas to provide high-achieving students with an opportunity to benefit from superior industry experience via the Qantas Group Future Pilot Program with mentoring from experienced Qantas pilots.

Queensland high school student can be industry-ready under Gateway to Industry Schools program for Aerospace that is hosted by Brisbane-based Aviation Australia. This is long-term development program where schools are supported to engage and partner with aerospace industries, tertiary education and training providers to inspire students to consider a skilled, diverse, and sustainable career or pathway into to the aerospace industry.